There is a cherished art in Japan called Kintsugi. Kintsugi, literally meaning golden rejoining, is the 15th century craft of repairing broken pottery with lacquer and gold or silver dust. The object often becomes more beautiful than it was originally. The Japanese celebrate these cracks or imperfections rather than concealing them. So in this spirit, I feel that I should celebrate my recent trip to Japan, rather than focus on it’s flaws.

I traveled to Kyoto by bullet train during my second week in Japan. It was a stark contrast to the bustling Tokyo (my first week’s sojourns); but the old-world architecture and beautiful traditions charmed me and I could not wait to start exploring the world-famous temples. I took a class in the art of Ikebana, or Japanese floral arrangement. And I had to rent a kimono for a day! I only saw two true Geisha while in Kyoto and their kimonos were breathtakingly elaborate. Mine was not as elaborate - only three or four layers of a “summer kimono” that I selected. As I have always been a “girly girl”, I was completely in my element swooning over all of the vibrant textiles. Once my hair and makeup were done, it was time to walk the old streets of Gion and have some photos taken. I felt transported to another time as I walked through the Machiya (old Japanese townhouses) in my Geisha garb. I then participated in a traditional matcha tea ceremony, which was as elegant as it was soothing.

I was told that my kimono had to be returned by 5:00pm. As my entire trip to Japan took place during a “deadly heat wave” and the temperature exceeded 100 degrees, I was sure there was no way I would last more than a couple of hours in the layered kimono. The next thing I knew, I looked at my watch and the entire day had passed! I loved playing dress up so much that I was heartbroken to finally return the kimono.

Nothing helps heartbreak like a Kobe beef binge-eating session. Yes, I know this is not a food blog. But I do love food, which is evident in the majority of my blog posts. And let me tell you, the buttery Kobe beef and sake went down very smoothly.

The Arashiyama Bamboo Forest and nearby Monkey Park Iwatayama were must do’s as well. Japanese snow monkeys (macaque) are quite famous. They even bathe in the local onsen (hot springs) in the winter.

My first task of the day was to check out the monkeys in their local habitat. Their local habitat turned out to be the top of a mountain. My guidebook had mentioned nothing about this so I arrived in pants, a straw hat, and Fendi wedges.

There was a sign when I entered the park that mentioned it was a 20 minute walk to get to the monkeys. I thought “wow that seems quite far but I’ve come all this way already”. I started the trek and realized very quickly that the “20 minute walk” sign was not even close. I may as well have been hiking Mt. Fuji.

People hiking downhill kept passing by, watching me struggle (or hover near death) and saying “you’re so close, it’s all worth it!”. Did I mention the “deadly heat wave”?

Most tourists seemed to be in my position, but the few Japanese people who passed were in full hiking gear with walking sticks. An hour later after many thoughts of turning back, I MADE IT! The top of the mountain housed hundreds of snow monkeys. The view was stunning and feeding playful monkeys will always delight me.

Walking down the mountain, I was the one encouraging tourists on their way up. I felt completely reinvigorated; like I could accomplish anything. I was reminded of the art of Kintsugi. If there had not been some “cracks” in my past, I would never have climbed this mountain. I would never have traveled to Japan on my own. And I would never have moved to New York or started my own business. It felt so liberating that, instead of pretending they did not occur, I had taken some of my old traumas and turned them into something more beautiful.

Speaking of “cracks”, I made some new friends at a local bar one evening who casually mentioned the impending typhoon. I barely knew what a typhoon was, so I nonchalantly started Googling “rainy day activities in Kyoto”. The next day, I began to grasp the severity of a typhoon and decided to broaden my Google search. Sure enough, the headlines read “Japan’s worst typhoon in 25 years to hit Kyoto”.

I was staying in an Air BnB in a tiny, two-story building off of an alley. Deciding that I would have been the first to go once the typhoon hit, either from lack of structure or lack of room service, I booked a hotel room nearby. Who says The Hyatt doesn’t count as adventure travel?

And while I’m on this subject, there seems to be a consensus among female travel bloggers that we are all “smart” travelers and can conveniently fit all of our essentials into one carry-on bag. WHO ARE THESE WOMEN? They seem to be wearing a different couture outfit in every one of their travel photos (whilst casually posing against a monument devoid of all tourists). Am I to believe that all of those straw hats fit in a carry on?

My carry on is dedicated strictly to shoes (g-d forbid the airline loses my Manolos). I also travel with a (consistently overweight) checked bag and a collapsible suitcase. Needless to say, I was cursing my shoe collection while transfering all of this luggage from my apartment to the hotel.

In the comfort of my bathrobe at The Hyatt, I survived Typhoon Jebi. Luckily my flight two days later was out of Tokyo. I would not have made it out of the nearby Osaka airport as the roof had collapsed during the storm and the airport was subsequently shut down due to flooding for a week. I later learned that the day I left, a 6.6 magnitude earthquake hit Hokkaido, Japan as well. Once more, did I mention the heat wave?

This blog’s design is a study inspired by the polish, colors, and resilience of Kyoto. The bamboo desk chair could be crafted from Kyoto’s Bamboo Forest. The lanterns and floor lamp are modern adaptations of traditional Japanese fixtures. The 1st Dibs lacquered antique casegoods are inspired by the breathtaking lacquerware in Kyoto. The letter set is calligraphy that I purchased while in the city and the vases are actual Ikebana vessels. The rich fuschia and tangerine represent the colors in the kimonos and monuments. And finally the “greenery” (Pantone’s 2017 Color of the Year) is an interpretation of the ubiquitous matcha tea. When I look at this, I feel transported back in time and location. 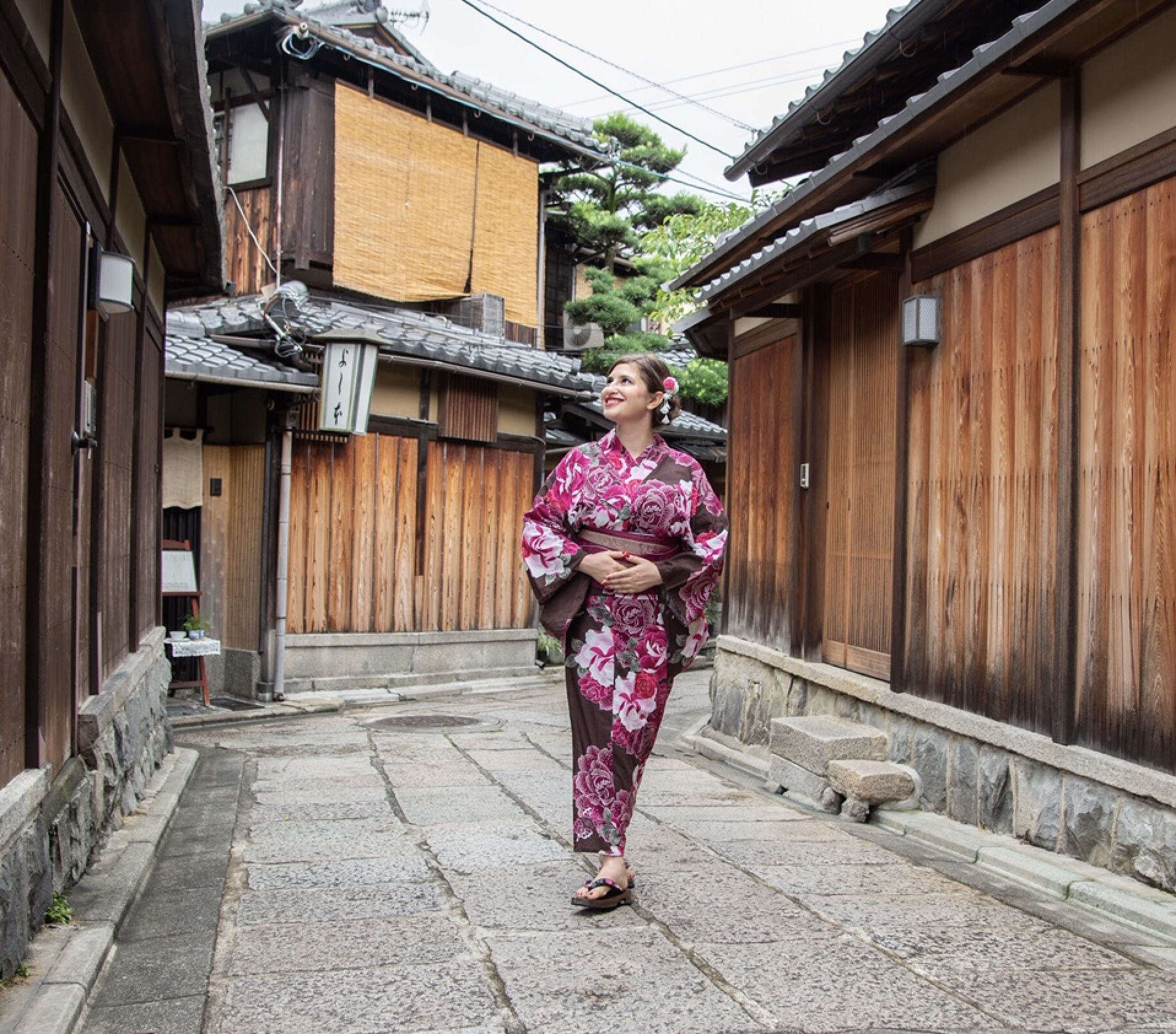 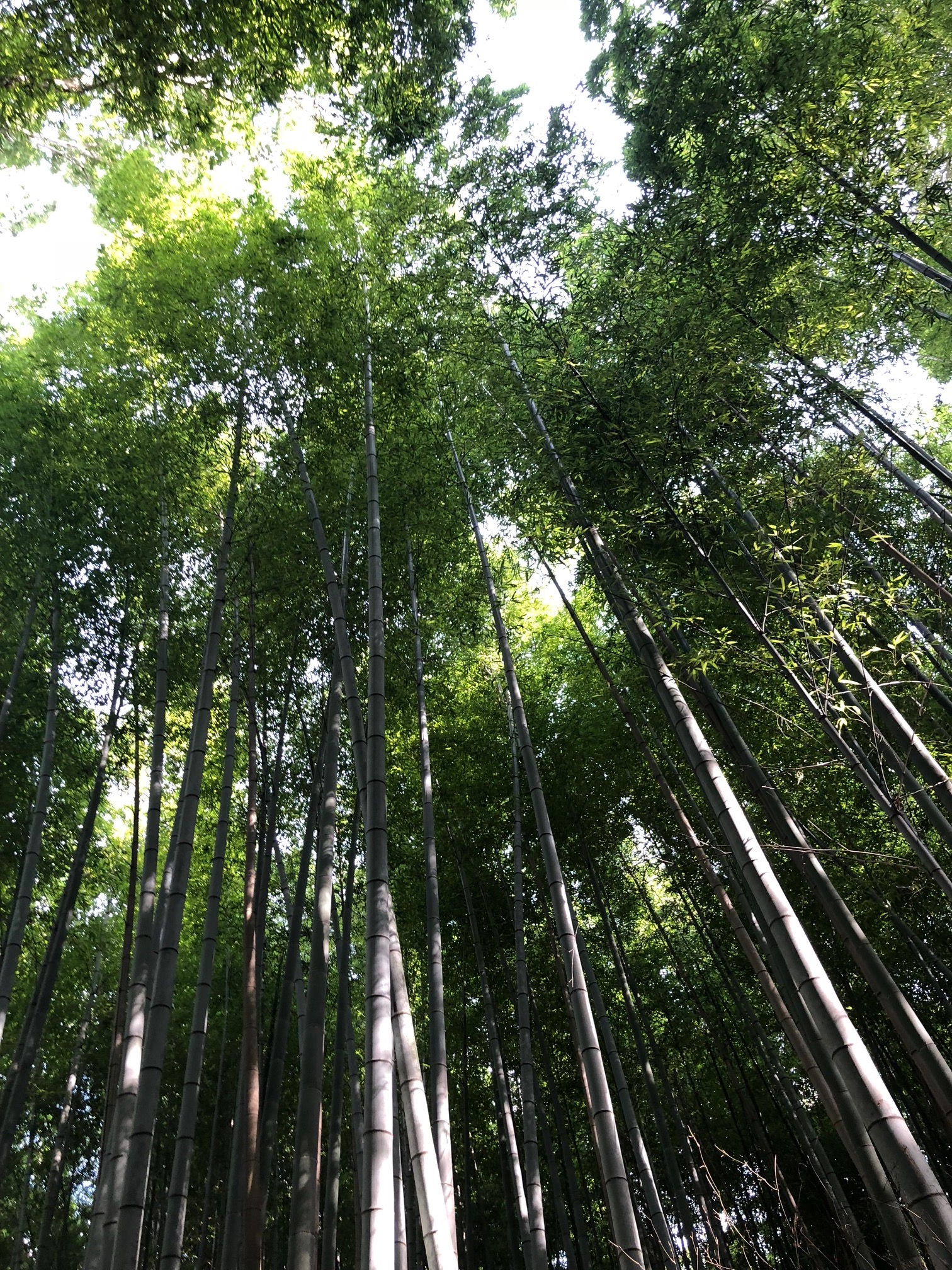 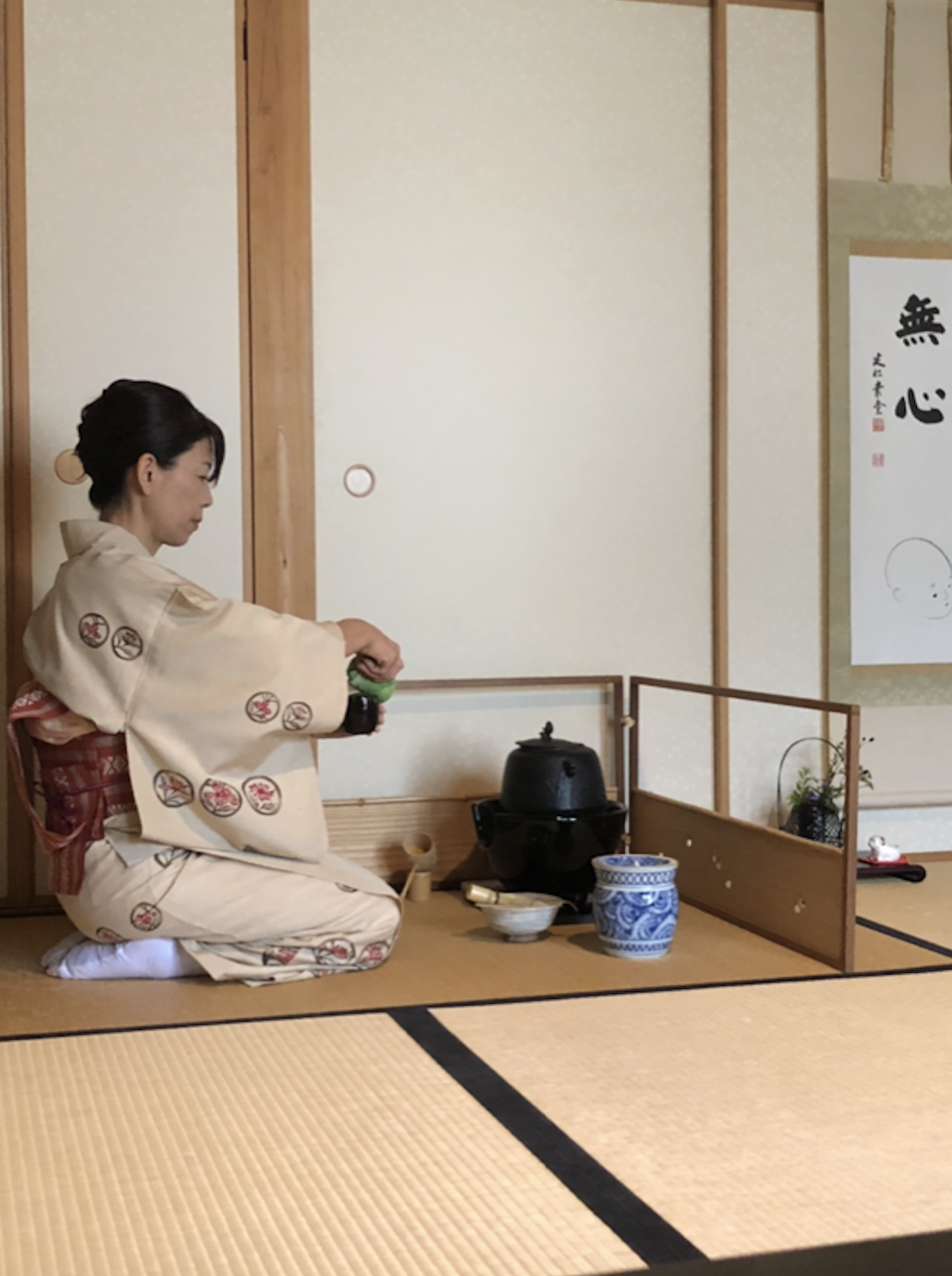 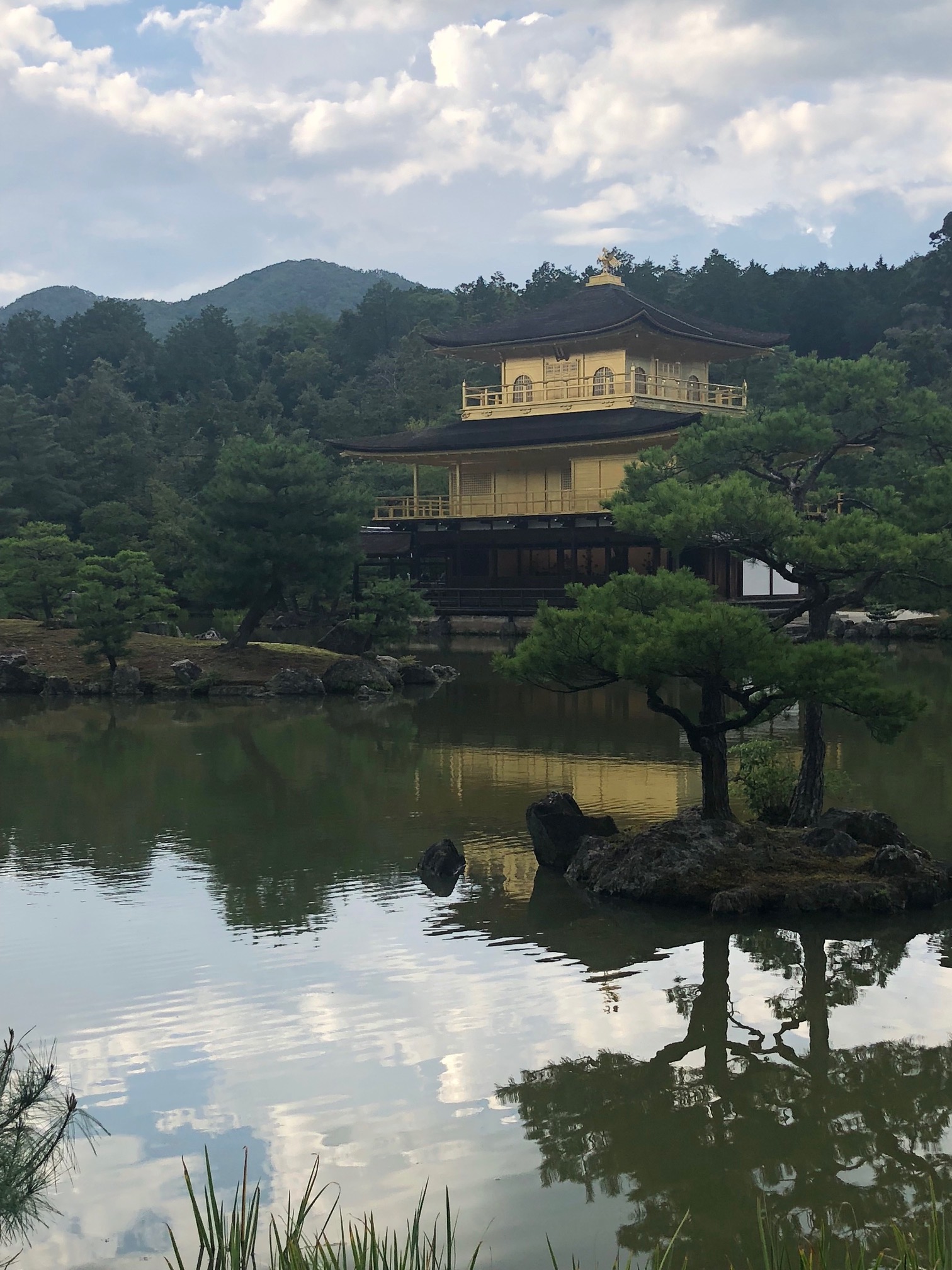 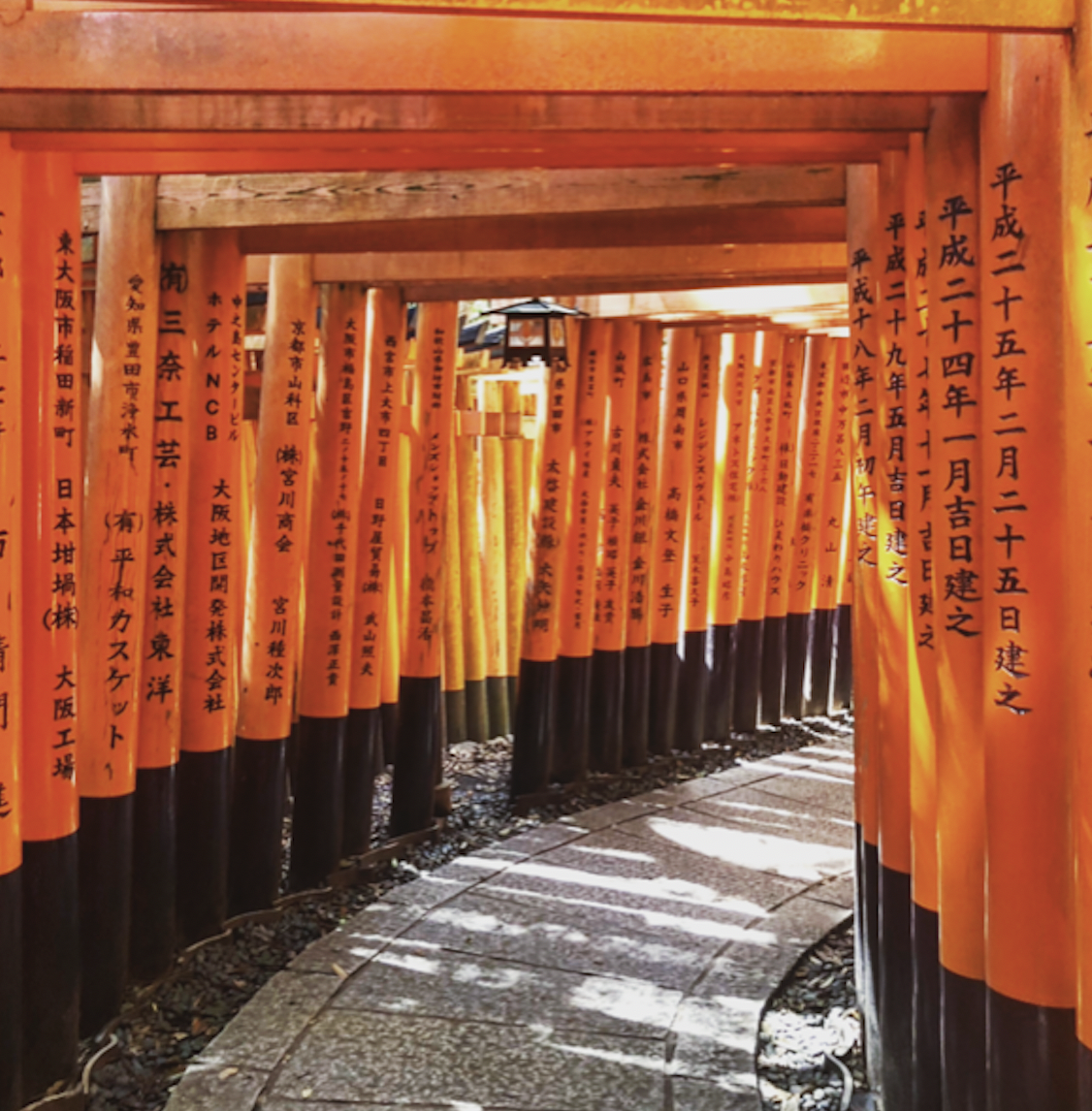 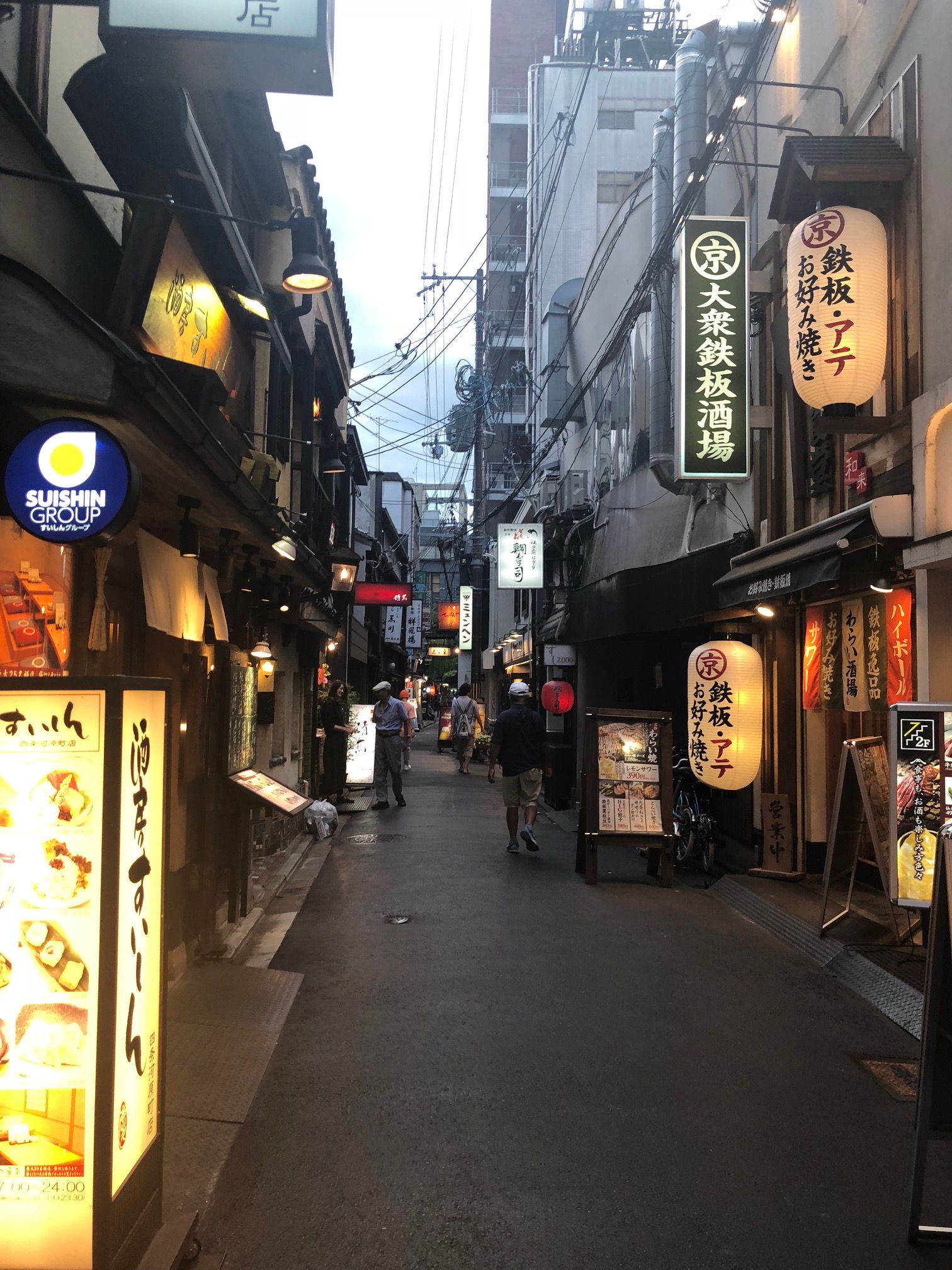 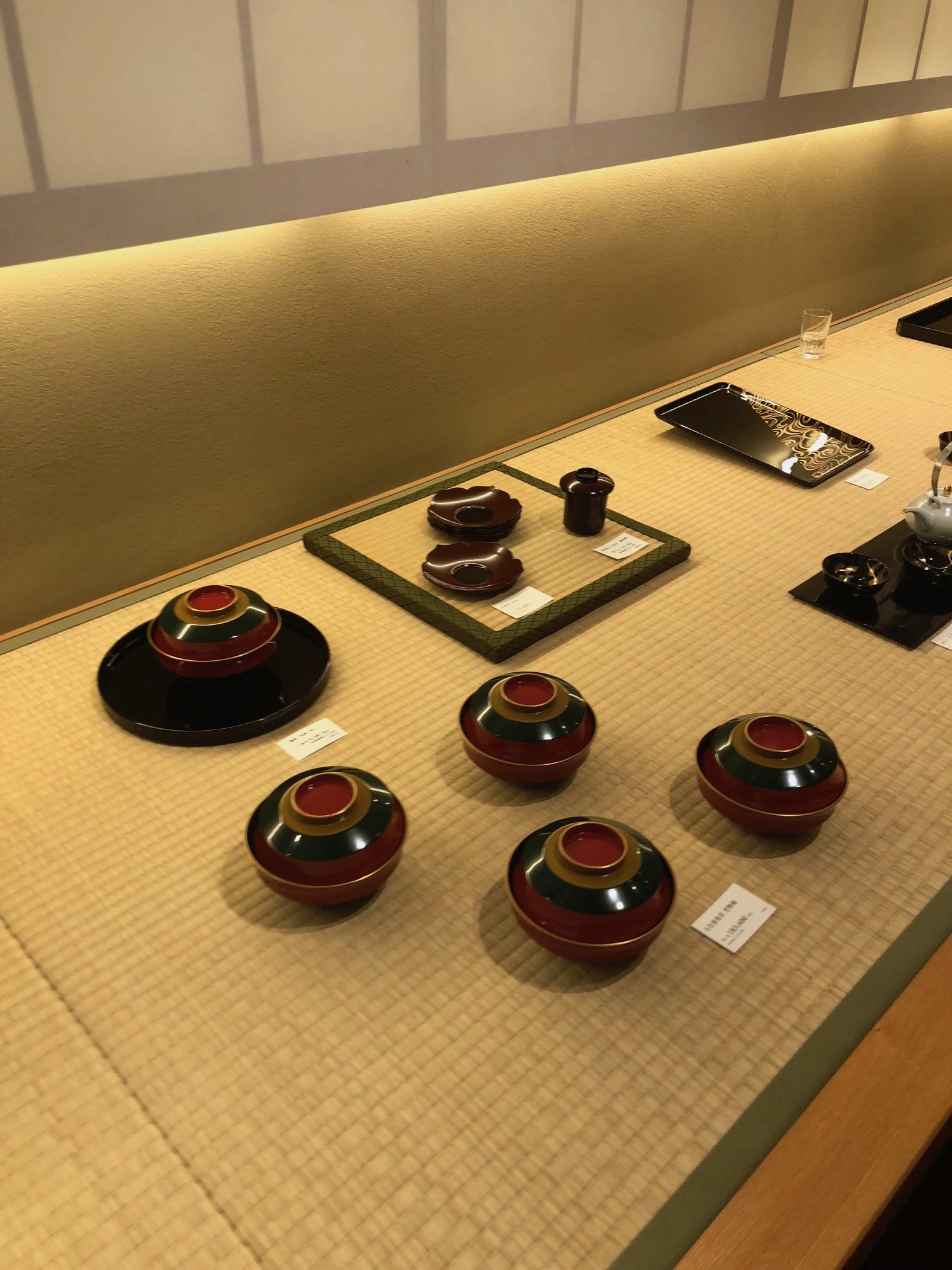 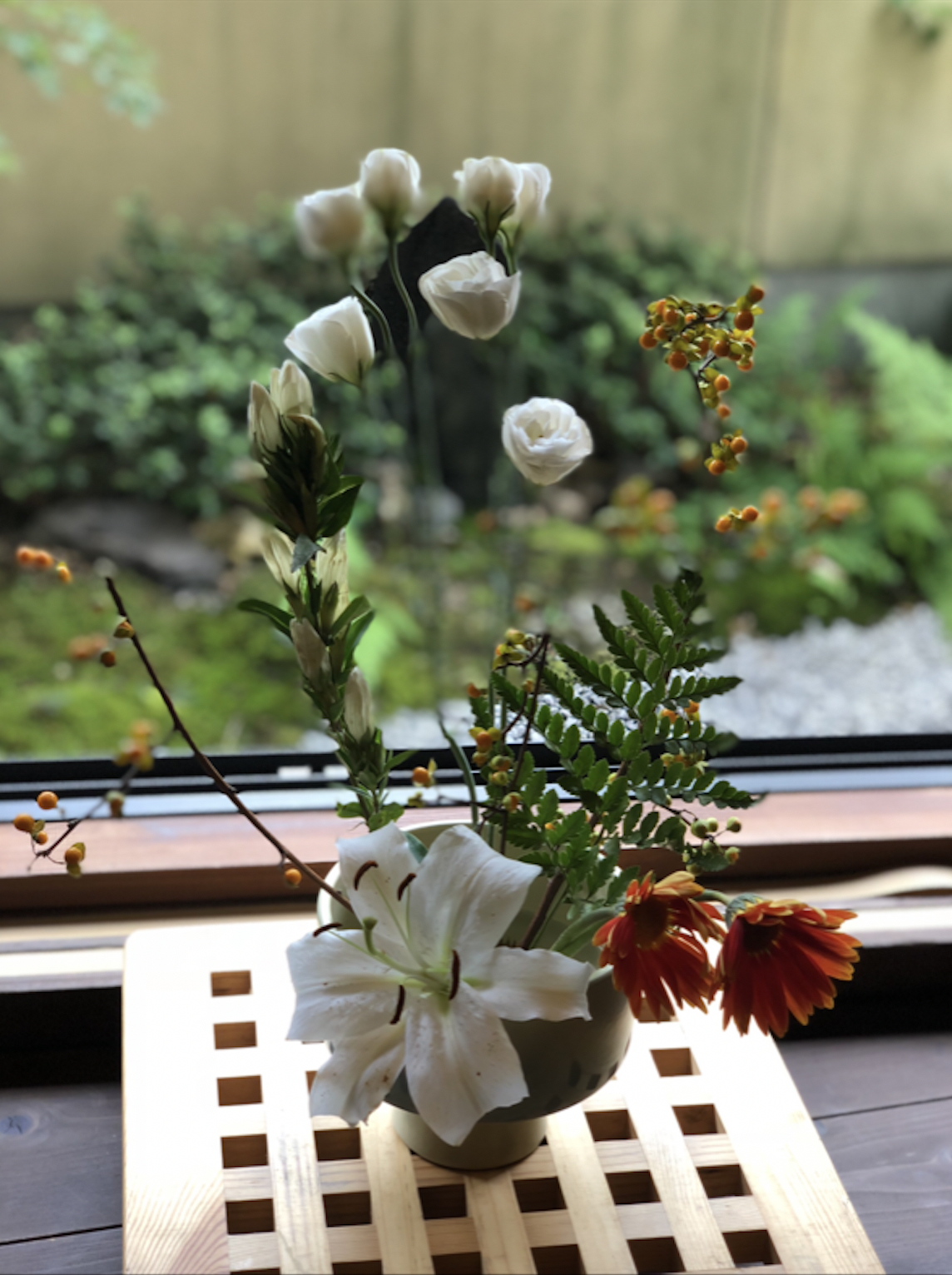 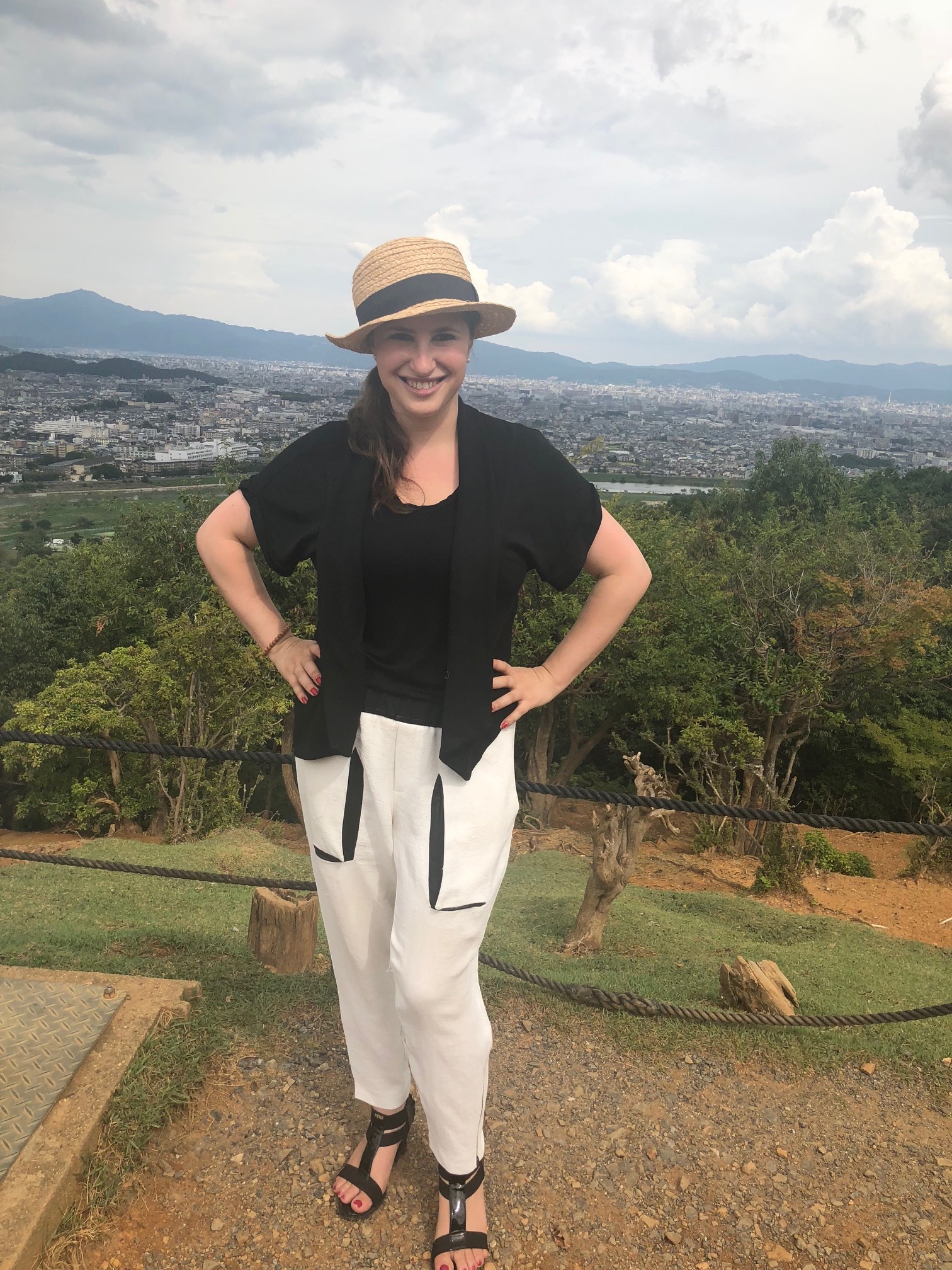