There is a great line in the movie “Romancing the Stone” when Michael Douglas’ character Jack Colton, when referring to a crocodile who swallowed a gemstone, says “Yeah, that poor old yellow-tailed guy...developed a fatal case of indigestion. He died right in my arms.” He had the crocodile made into a pair of boots.

This reminds me of my recent trip to India in a lot of ways; the most obvious of which was my potential death from “indigestion”. However, much like Kathleen Turner’s lovably uptight character Joan Wilder, I often end up surprising myself with how many mishaps I can handle and still come out on the other end laughing and kicking ass.

I visited India because my girlfriend was getting married in Gujarat. I decided to extend the trip to include some sightseeing in the state of Rajasthan. My driver Hansraj dutifully picked me up. Upon arrival in Delhi at 4:00am, I was told that my hotel was in an alley and that the car could not pull right up. The air quality on my weather app was listed as “hazardous” and surrounded us in a cloud of fog. We pulled up to an almost deserted alley, where some people were sleeping under blankets on the street. As one hotel employee was helping us unload the bags, I saw a man out of the corner of my eye with a big cane and a turban covering everything but his eyes. “Oh good, this is how I die” said my jet lagged brain.

He walked straight up to the open car and stared at me, his black eyes seemingly piercing into the depths of my soul. “Umm who is this?!” I spit out. Apparently it was the hotel security guard who had come to walk me and my 10 bags (just kidding, only 3) through the dark, deserted alleys to the hotel.

A few hours later I arrived at the requisite cooking class (I take one in almost every country I travel to). The samosas, chai tea, dal, and chicken vindaloo were to die for. And my teacher took me to the Chandni Chowk spice market for a tour. Never in my life had I experienced such a sea of humanity!

There were hundreds of people, rickshaws, animals, and motorbikes all stumbling on top of one another. I had to get through all that just to make it another 50 feet. And while the trip through the market took us hours, I excitedly stopped for scarves, saris, and spices.

At this point I found it quite comical that I had ever considered visiting this country without a driver and tour guides (independent woman or not).

After several showers the next morning, Hansraj and I were off to Agra. My first experience with driving in India once again rang my alarm bell of “so this is how I’m going to die”. I felt like Frogger trying to cross the road while every 10 seconds there was a potential collision with something (be it a bike, person, car, or cow).

We made it to Agra in one piece. The Taj Mahal blew me away! I have never seen such exquisitely carved marble work and inlays of precious stones.

Next was Ranthambore National Park and my tiger safari! The hotel “glamping” was as luxurious as the roads were rough. While searching the dry, expansive park for several hours with a lovely group of British and Australian tourists, we finally came across a tiger!

It is quite the rare sighting and we were considered very lucky. Of all my fears, I discovered that apparently tigers are not one of them. Our wide open Jeep kept backing up as the tiger approached; meanwhile I yelled at the guides to stop and get closer. It was such an incredible thing to see in the wild.

We arrived in “The Pink City” of Jaipur next, the city I was most excited to see because of it's reputed artistic flair. Unfortunately this was where I got sick with "Dysentery" (just kidding, it was only a parasite). I called my mom and jokingly suggested I change the name of my blog to “Hospitals Around The World”! The doctor almost killed me by giving me a Sulfa drug, which I was allergic to. I would never have known had I not called CVS in New York and asked about the pills that were described in Hindi...neurotic New Yorker 101.

On the way back to the hotel, we got hit by a car. At this point I started laughing and wondered what could possibly happen next.

Luckily, I was with Saint Hansraj; who told me that he lived 10 minutes away, but if I wanted he would sleep in his car outside my hotel in case I needed to go to the hospital again in the middle of the night. I was deeply touched.

I missed Jodphur and a desert camping experience due to my “Yellow Fever”. But I happily stayed in Jaipur and fixated on jewelry and block printing. Oh the gemstones…

While savvy merchants adorned me with sapphires, rubies, and emeralds, I had a hard time saying no; as one does when presented with such exotic, breathtaking pieces. I felt like I was in “Romancing the Stone” yet again.

I had been anxious to see the block printed textiles I often select for client’s residences in New York. I was quickly taught how the process works and how the vegetable dyes are applied to cotton to form the patterns I am so familiar with. The ordered repetition of the Rajasthani patterns, however dynamic, was still a soothing contrast to the unrepentant chaos of the streets.

My last day in Jaipur, I was taken to the beautiful Monkey Temple. Apparently many of the locals who lived in this area had never seen tourists so I felt like Meghan Markle (with my Indian Prince Hansraj) as almost every person we passed wanted pictures with me. One family even thrust their baby in my arms for a picture!

Udaipur was the last stop in Rajasthan before the wedding. I had previously bought some liquor; but later found out that Gujarat was a dry state and that it would have been illegal to cross the border with any alcohol. Hansraj told me it would be fine, as I was a tourist. I said that I did not want to end up in Indian prison over some vodka (Midnight Express anyone?)! His response was to suggest putting the bottle in HIS suitcase in case we got caught. Talk about service. I chucked the vodka.

Once we arrived at the Gujarat border, Hansraj had to walk across the freeway to deal with my papers and pay taxes.

While I was locked alone in the car watching a movie on my laptop, a group of 5 or 6 kids came up to the car begging for money and were trying to open all of the doors. One of the kids had a wooden plank the size of a baseball bat and started banging on the windows. Finally they climbed on top of the SUV and the entire car started shaking from side to side. I thought it was going to topple over completely.

I was trapped unless I wanted to risk being physically attacked. I had no cell signal to call Hansraj. But he finally looked over and saw me clawing at the window for help and sprinted across the freeway.

Completely terrified, I begged him not to leave me again but he had to go back and finish dealing with the tax papers. The same thing happened again and when we finally left, the kids were literally still hanging from the side of the car as we drove away. They had done substantial damage to the car.

In the hour that it took me to stop shaking, I felt only gratitude for my safety and for everything that I have. There was so much poverty all around me that it really hit me hard and made me realize how lucky I am to live in the US.

I have family and friends who love me, my health (“Cholera” aside), a home, an education, and a business. It’s easy to take such things for granted until you see how many others don’t have the same luxuries.

As Hansraj and I approached the wedding destination where he was to leave me, we both lamented how sad we were to separate. He told me that I had become like a part of his family (he has been happily married since 18 and has a young daughter). I cried when he left and I am getting choked up now even writing about him. This man is truly one of the most caring, special people I have ever had the pleasure of knowing.

I am someone who usually takes care of myself. But in a rough country I felt both protected and appreciated for who I am (“Malaria” and all). I will never forget Hansraj.

The 3-day wedding was incredibly beautiful and it was wonderful to be with friends and to celebrate. I headed home with some gemstones as well as a newfound sense of gratitude. The only thing missing was Michael Douglas waiting with a boat outside my New York apartment.

This blog’s design is inspired by the intricate detailing, patterns, and colors of India. The block printed John Robshaw textiles are actually made in India and the pattern of the John Richard dresser evokes the many forts of Rajasthan. The Houles tiebacks are like the jewelry of Jaipur, while the antique 1st Dibs lounge chair recalls my Ranthambore tiger interaction. The marble top on the Matthew Fairbanks side table brings me back to the wistful marble and the opulent romance of the Taj Mahal. The Pink City of Jaipur beckons through the soft drapery fabrics from Seemakrish. Through a window adorned with these drapery accents, I can almost see the mesmerizing patterns and colors of India. 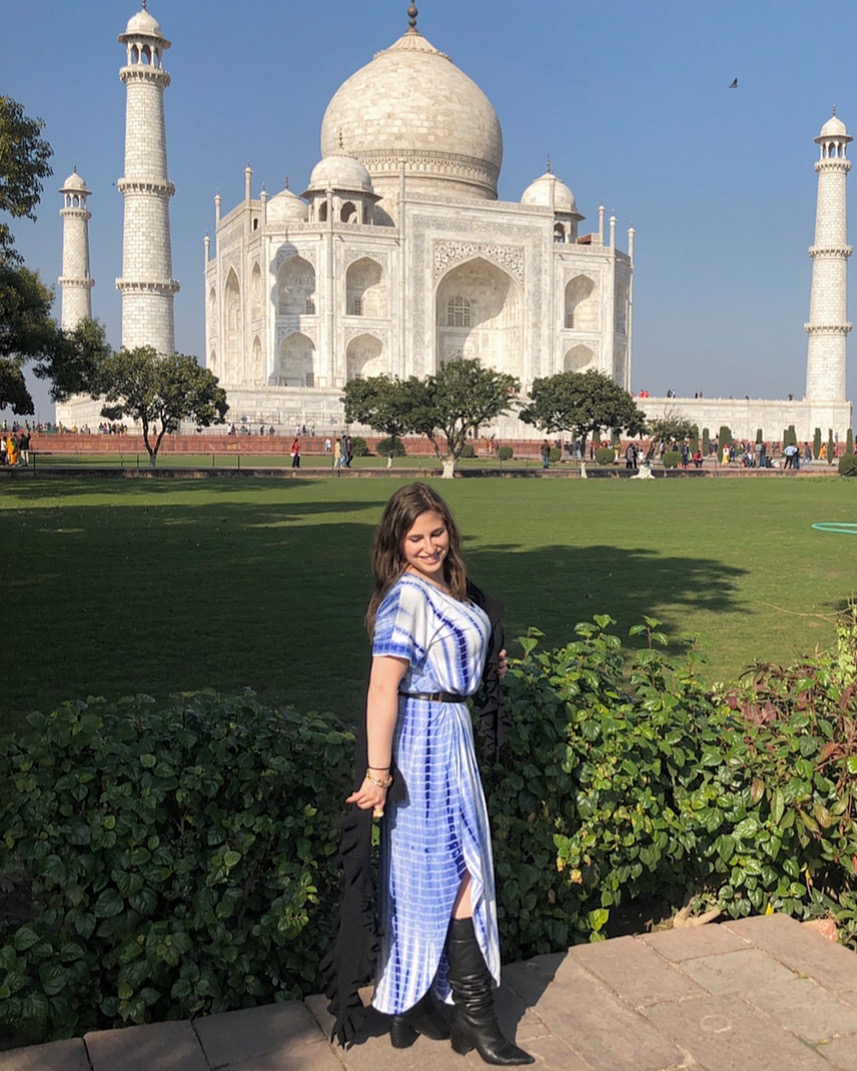 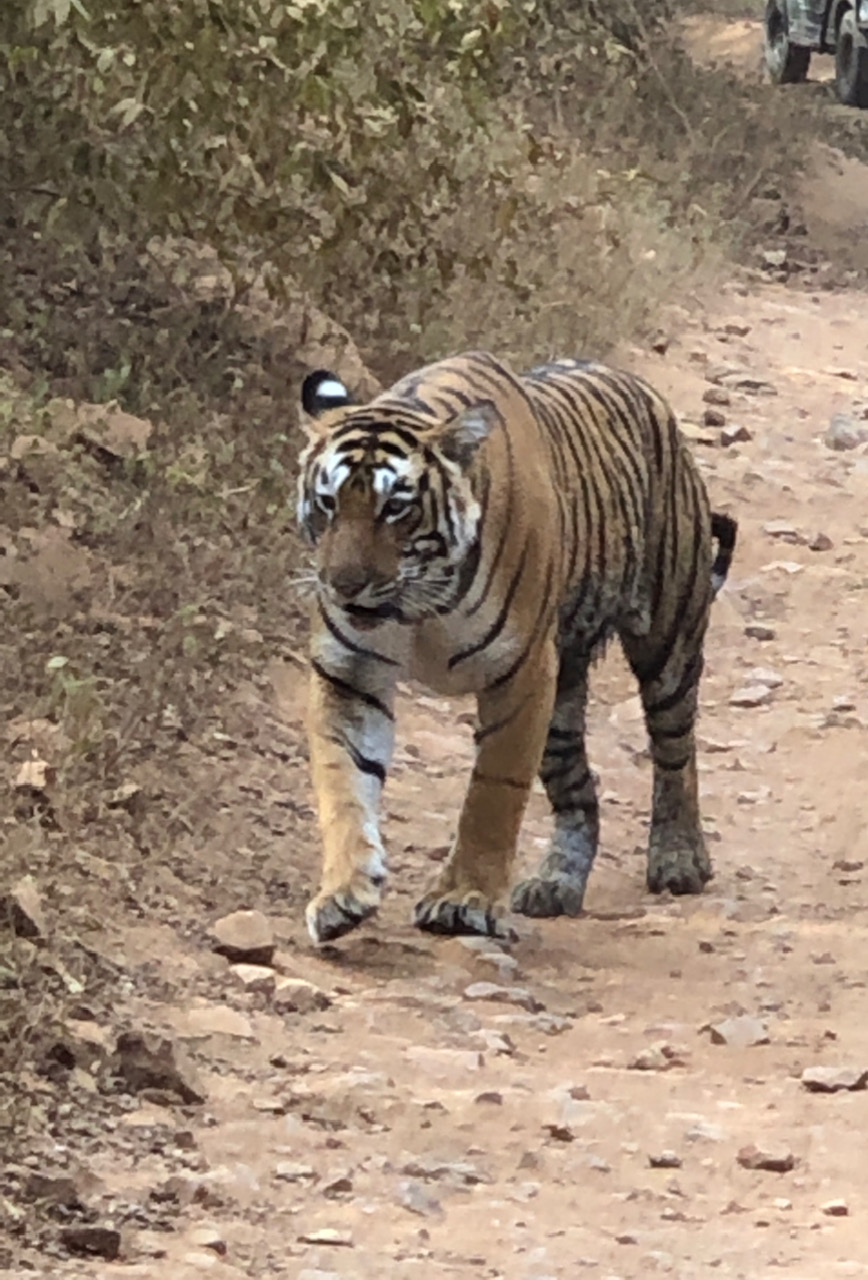 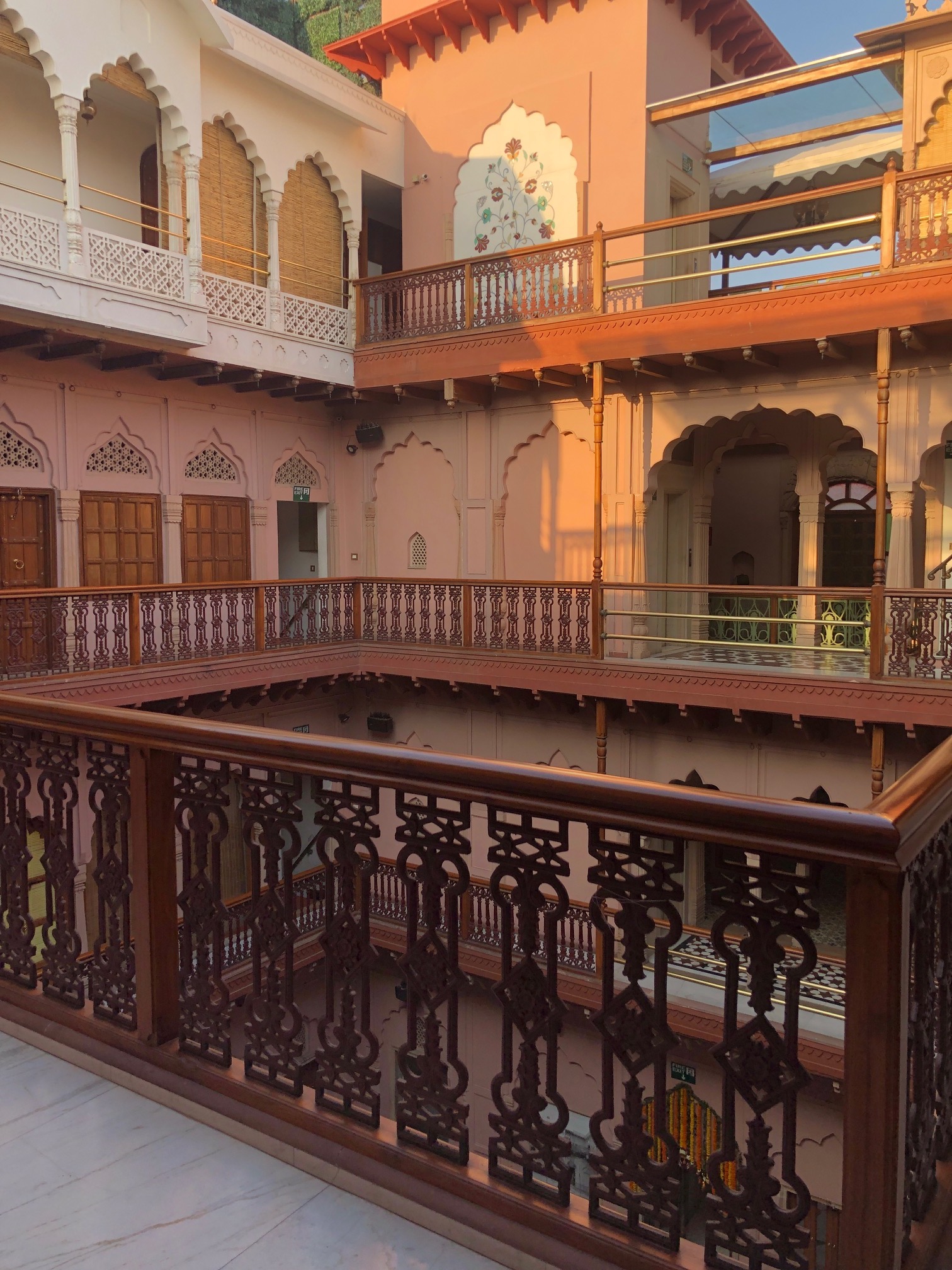 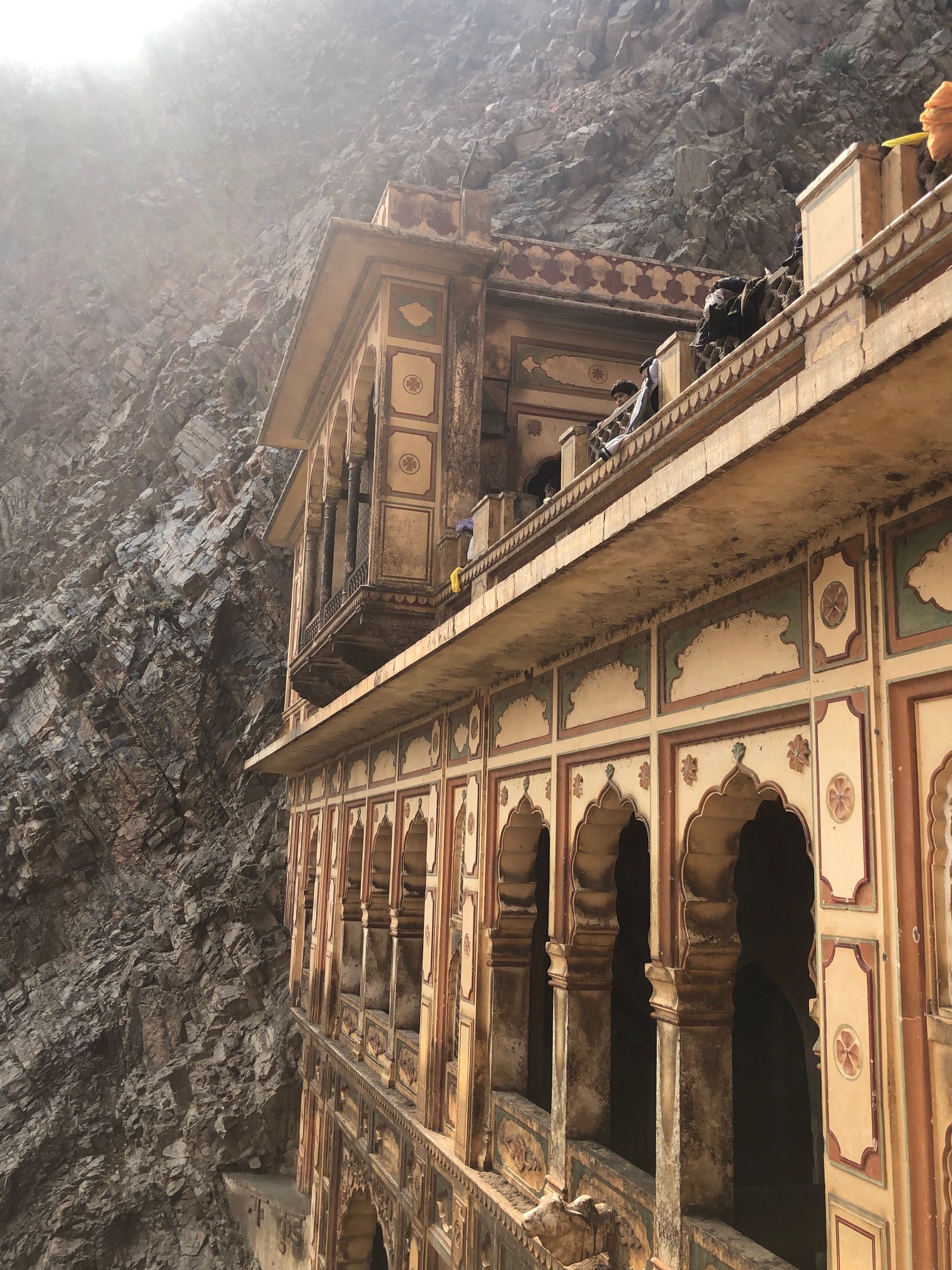 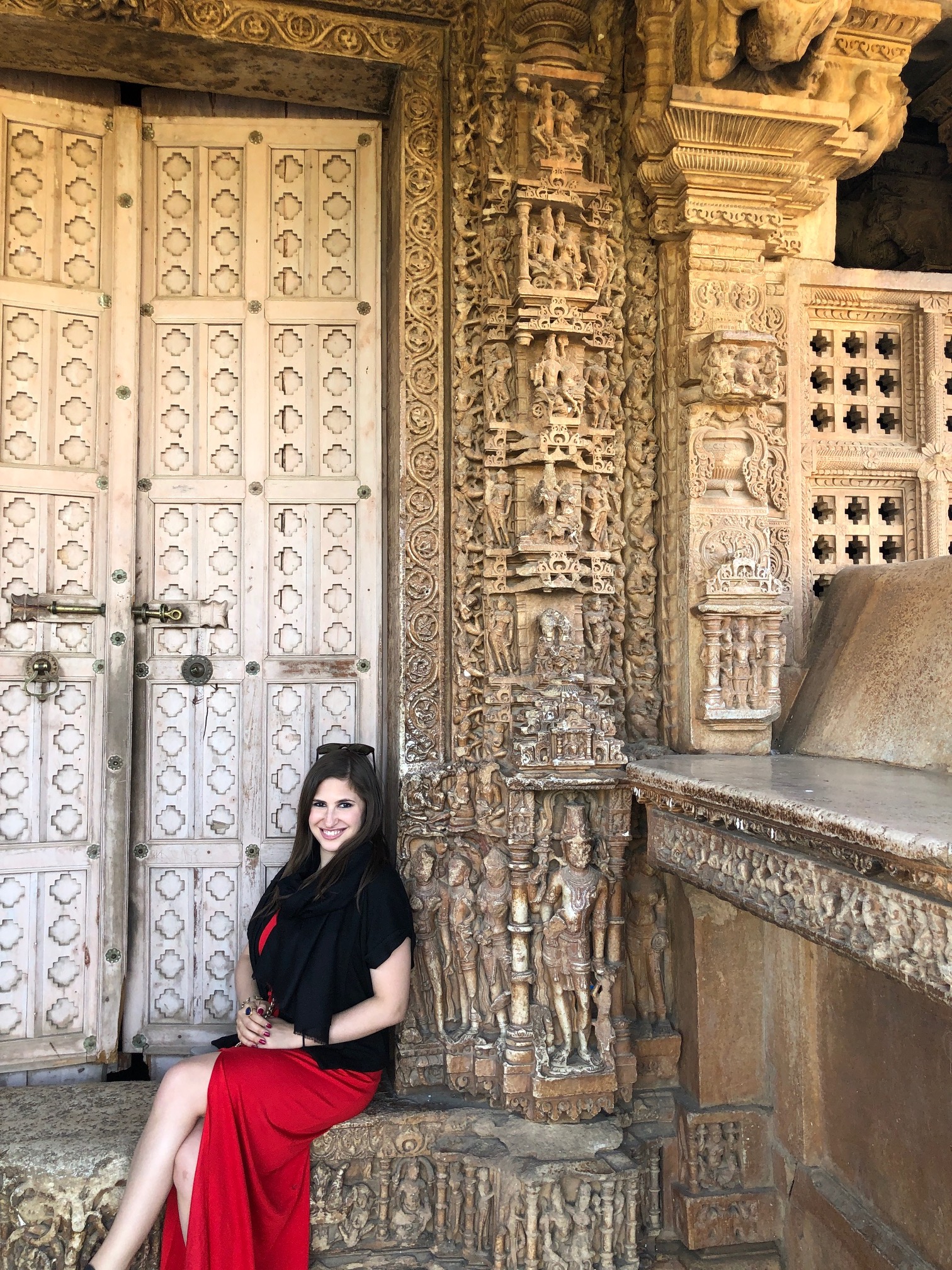 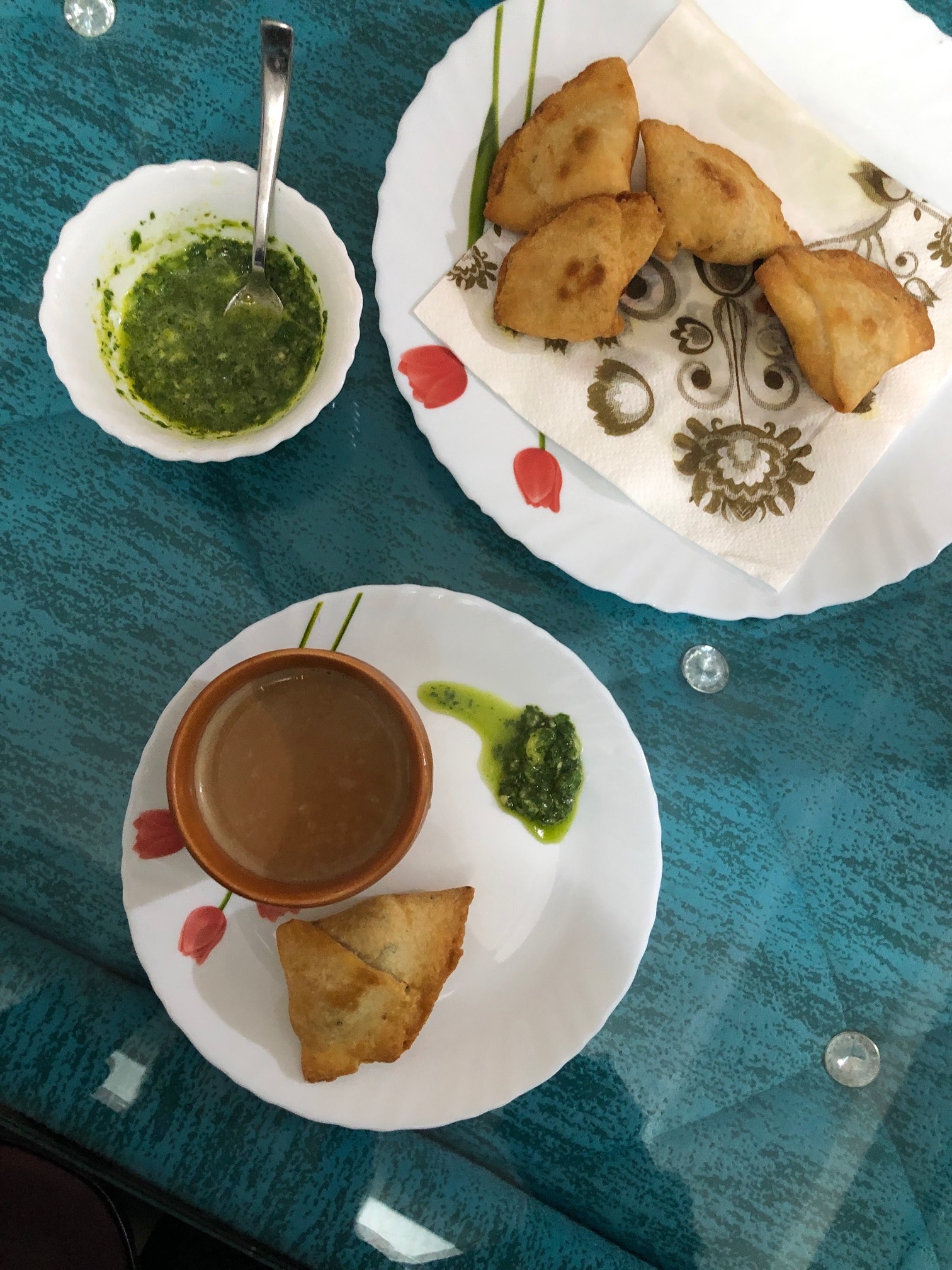 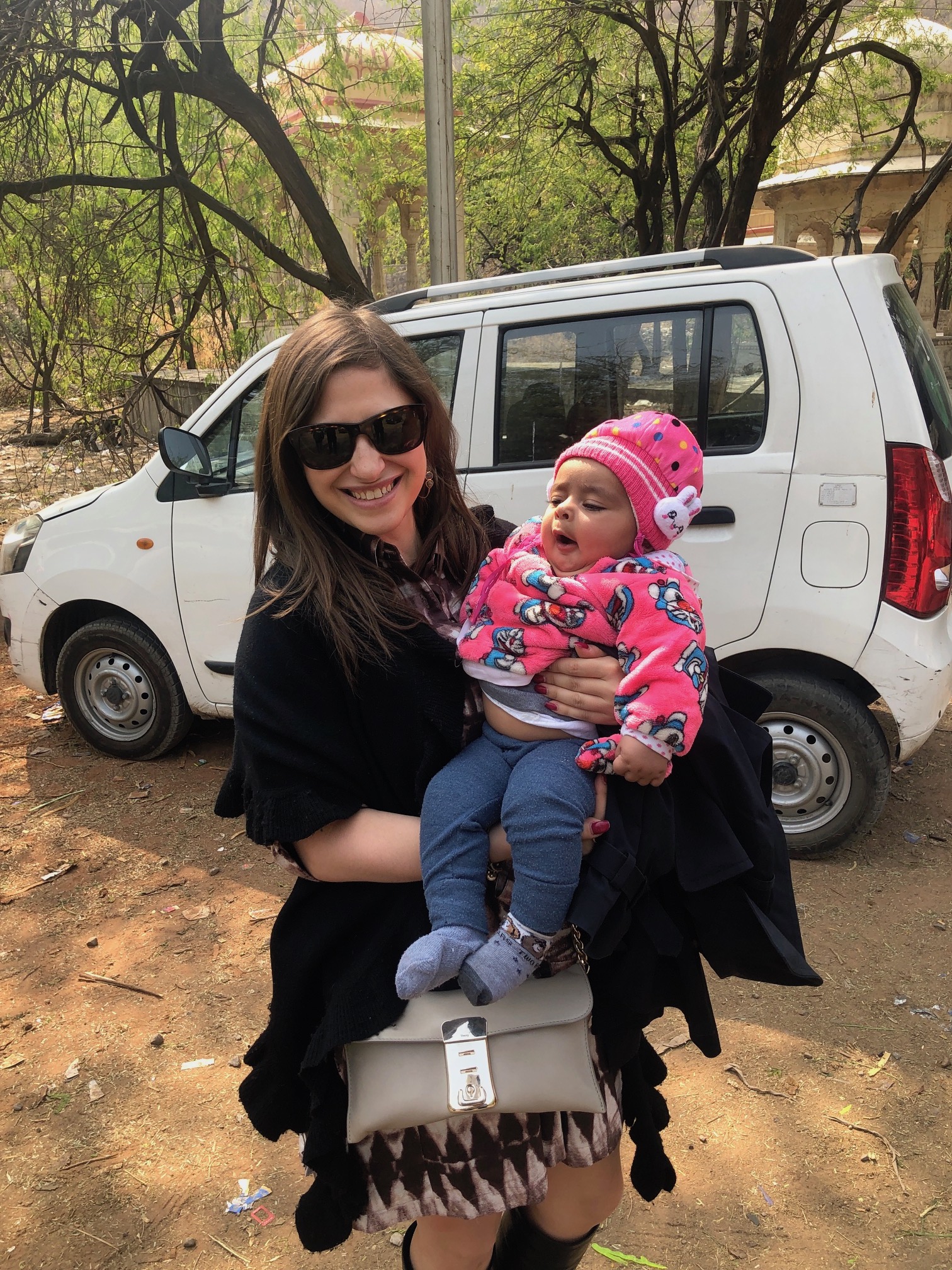 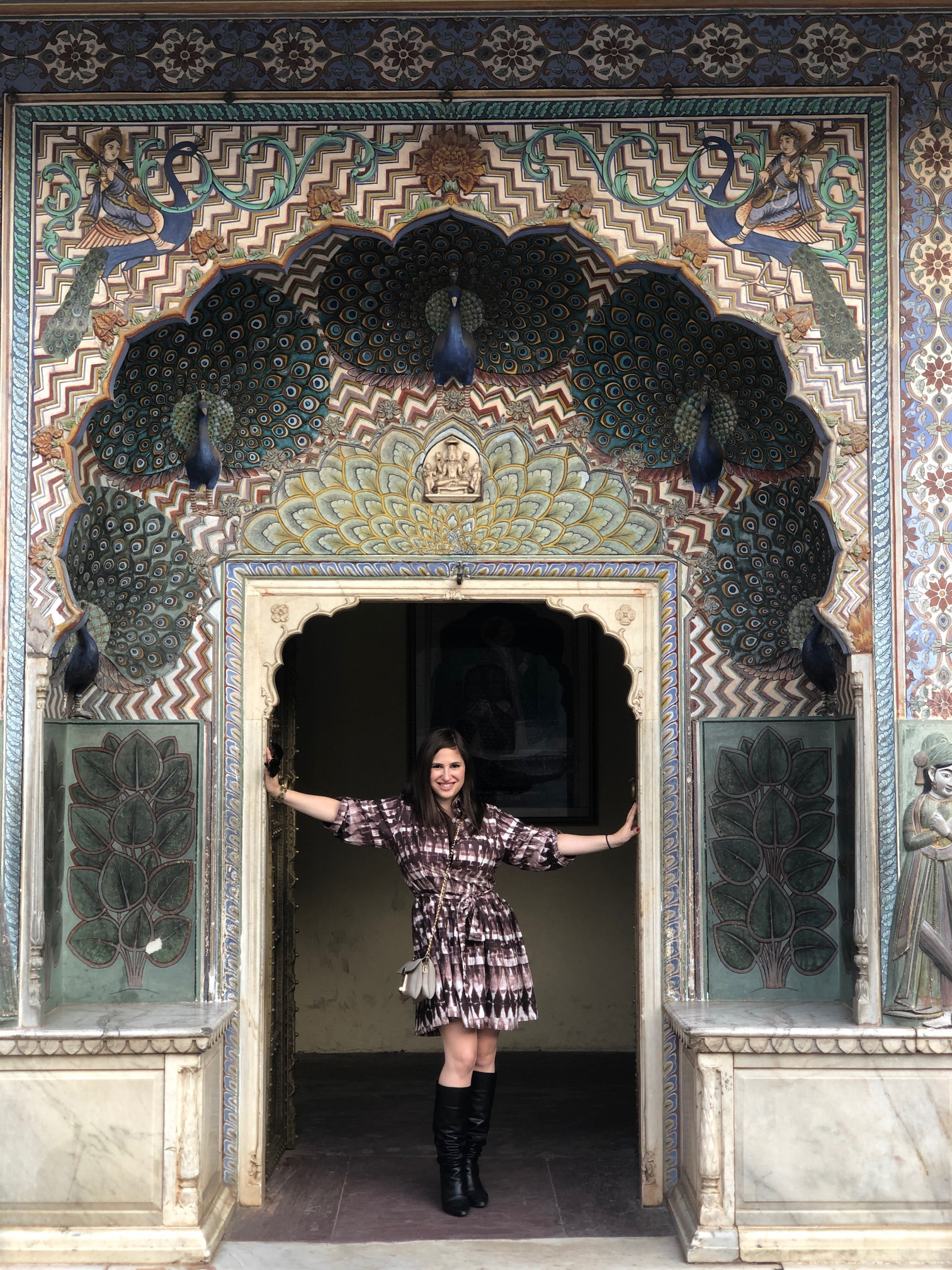 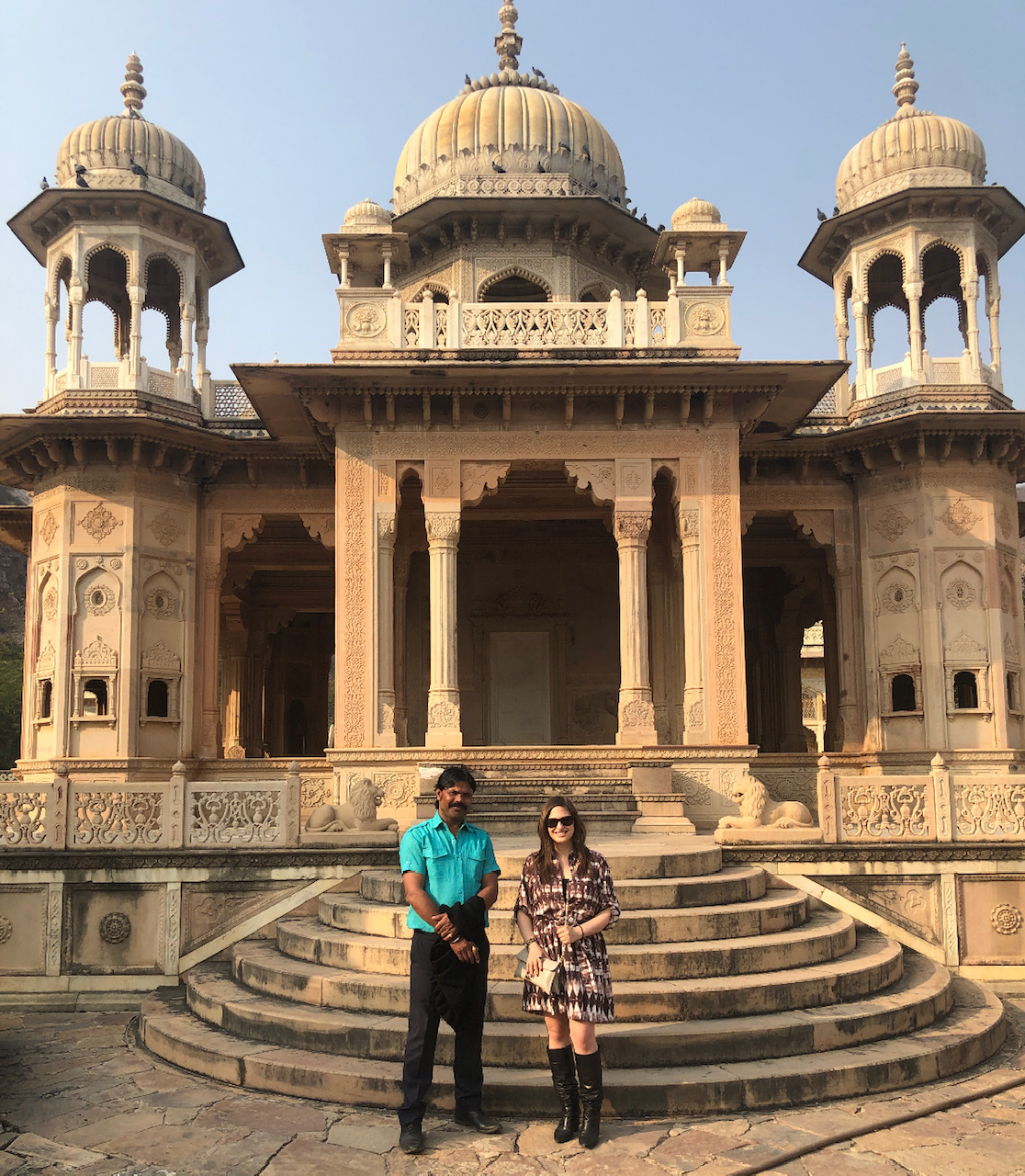